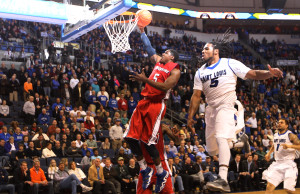 Duquesne Dukes Jerry Jones gets by Saint Louis University Billikens Jordair Jett for two points late in the second half at the Chaifetz Arena. UPI/Bill Greenblatt

Mike McCall Jr. led the Billikens with 18 points, just one off his career high. McCall Jr. was 3-of-5 from 3-point range and 7-of-8 from the foul line, and he added three assists.  Jordair Jett had 13 points (6-of-9 FG) to go with three assists and a game-high-tying three steals. Rob Loe tossed in 12 points, and Dwayne Evans tallied 10 points and a game-high 12 rebounds for his seventh double-double of the season.