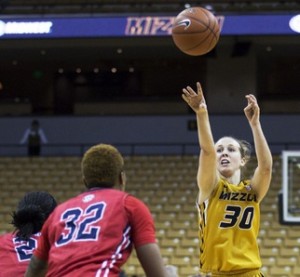 Seniors Bri Kulas and Tania Jackson were honored before their final regular season home game as Tigers. Kulas led all scorers with 26 points and junior Morgan Eye added 21, surpassing the 1000-career point mark to help Mizzou (17-11, 6-9) complete a season sweep over the Rebels. Kulas also went over the 1,000-mark for her career.

In the end, it was a pair of freshman who came up big at the free throw line for the Tigers. With the score tied 71-71 with 55 seconds to play, Lindsey Cunningham hit two free throws and then following a charging call on the Rebels, Jordan Frericks made two more free throws to clinch the win.

Missouri has one game remaining at Arkansas next on Sunday, before heading to Duluth, Ga., for the SEC tournament next week.