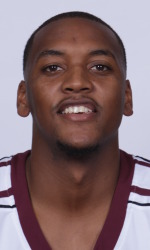 Missouri State started all four of its seniors who combined for 30 points in a 72-56 conference win over visiting Loyola Chicago. The Bears (19-10, 9-8 MVC) got a double-double from Jarmar Gulley – his sixth of the league season – and 14 points from fellow senior Keith Pickens.

For the second game in a row MSU never trailed, and the Bears held off a late rush by the Ramblers in the final two minutes, but the Bears closed out the game on a 6-0 run, to avenge an earlier loss to the Ramblers.

The Bears will conclude the regular season Saturday at 1 p.m., against No. 2-ranked Wichita State (30-0, 17-0 MVC) at Koch Arena. The game will be televised nationally on ESPN or ESPN2.