The Missouri Department of Corrections is prepared to carry out the execution of Michael Taylor on Feb. 26 pursuant to the warrant issued by the Missouri Supreme Court. That’s the statement from the Department itself, and backed by the Governor. 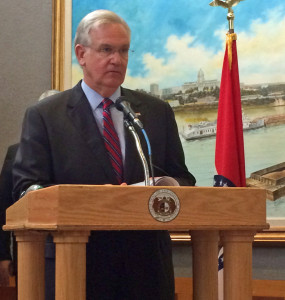 A compounding pharmacy in Oklahoma that has supplied the pentobarbital used in the last three executions was ordered by a court in that state to cease sales to Missouri for the purpose of executions.

According to the Kansas City Star, Missouri officials now say they’ve arranged with an unidentified pharmacy to provide the lethal injection chemical for use in Taylor’s execution.

Meanwhile, Taylor’s attorneys have asked a federal judge to stay the execution, saying the state has no lawful way to carry out the lethal injection.

“We work very hard to make sure that the ultimate penalty in the state of Missouri is carried out in as humane as way as possible,” Gov. Jay Nixon said. “And we’re prepared for the execution next week. I understand others can have opinions and thoughts … my thoughts are with the review process obviously for potential commutation down the stretch but more importantly that that for the victims that continue to miss their loved ones from heinous crimes like this. We are prepared to move forward to complete this punishment in a timely fashion.”

Taylor is on Death Row for the 1989 killing of 15-year-old Ann Harrison. He and Roderick Nunley both pleaded guilty to kidnapping Harrison as she waited for the school bus, raping her, stabbing her, and leaving her in the trunk of stolen car they later abandoned, where she succumbed to her injuries.

The Supreme Court has not re-issued a death warrant for Nunley at this time.