The first bill to be signed by the Governor this session becomes law just five days before candidate filing begins, allowing those serving overseas to run for office. It would also allow folks with disabilities to file by proxy. 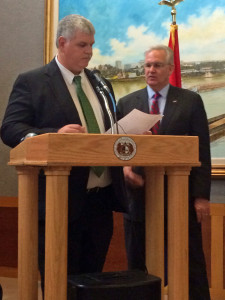 Current law mandates that candidates filing to run for office must do so in person with the Secretary of State in Jefferson City. That has been changed to allow members of the military to file from where they are stationed through a proxy who can participate in the filing process. Gov. Jay Nixon says it’s only fair that those fighting for our freedom should be given the same rights as everyone else.

“Candidates who wish to serve in state or local government should not be put at a disadvantage because they have also chosen to bravely serve our country,” Nixon said. “This bipartisan legislation levels the playing field for our military members so that they have the opportunity to pursue back home what they have already demonstrated in uniform – a commitment to service.”

Sen. Will Kraus of Lee’s Summit served in Iraq as platoon leader in 2003. He says he was fortunate that he was able to return to Missouri on leave so that he could file to run for Senate; he was elected in 2004. Secretary of State Jason Kander says he had returned from serving in Afghanistan and was in the Army Reserves when he filed to run for office, but could have been deployed under the same circumstances.

VFW Legislative Chairman Dewey Riehn says the veterans groups supported the measure and pleased to see the unanimous vote for its passage. He says those who have served in the military make good elected officials because they are leaders, are used to working as a team, and operate well under stress.

Candidates for state offices must file in person with the Secretary of State. However, members of the armed services on active duty may file by certified mail. Candidates filing in person on the first day select a number by random drawing to determine placement of their name on the primary ballot. After the first day, candidates are placed on the ballot in the order of their filing.