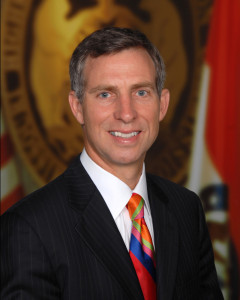 Miller had been serving as vice-chair and Carmichael as chair. The commission voted to switch the roles, as is their common practice, at its monthly meeting Feb. 11. Miller was appointed to the commission in August 2009. Carmichael has served on the commission since April 2009.

Miller thanked Carmichael for his leadership.

““He provided direction as three new members joined the commission and guided us through the difficult decision to not add new projects to the Statewide Transportation Improvement Program and to suspend the Cost-Share Program,” Miller said.

Missouri Department of Transportation Director Dave Nichols said both Miller and Carmichael have an understanding of the hardships the department faces.

“I look forward to working with them as we tackle some big challenges, most notably how we are going to fund transportation at the state and federal levels for the long term,” Nichols said.

Miller is a partner in the Kansas City law firm Miller Schirger, LLC and focuses much of his practice on the construction industry. Carmichael is president and managing partner of the Springfield law firm Carmichael & Neal, P.C.

The six-member bipartisan commission governs the Missouri Department of Transportation, the agency responsible for building, operating and maintaining the state highway system and supporting other transportation modes in Missouri. Other commission members are Kenneth Suelthaus, St. Louis and Gregg Smith, Clinton. There are two vacancies yet to be filled.

The legislature is considering a bill that would add a seventh member to the commission, and would require a 3-4 split of Democrats and Republicans. The bill, sponsored by Rep. Shawn Rhoads (R-West Plains), has been heard in the House Transportation Committee but has not been voted on.