Gov. Jay Nixon says he’s working with legislators to pass a bill that cuts taxes for working Missourians. Nixon vetoed a tax-cut measure last year, saying it would have imperiled funding for K-12 education. The legislature failed to override that veto when two Senate leaders voted with Democrats in opposing the override. 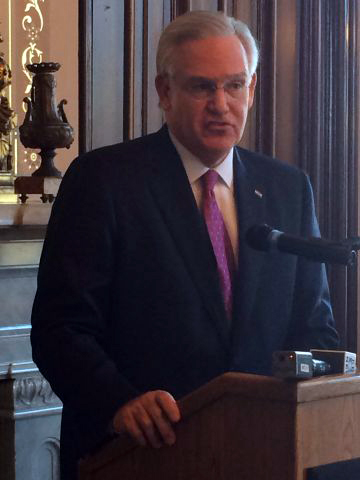 Nixon says he will not sign a tax-cut bill unless it contains certain, clear-cut provisions, including fully funding elementary and secondary education. He’s also calling for an end to corporate and special-interest hand-outs.

“Despite evidence that the economy is moving forward,” he said, “there are still some who insist the way to grow our econ is to take money out of classrooms, and I just don’t think that’s the right approach. Last summer we saw the people of Missouri agree, as folks in all corners of the state and all political stripes came together to help sustain my veto of House Bill 253.”

“If we’re going to cut taxes, I want it done the right way, in a way that protects investments in our classrooms and gives a break to folks who really need it,” he said, adding that he’s had productive discussions with lawmakers, including Sen. Will Kraus of Lee’s Summit, on crafting a tax-cut measure he’ll approve.

“We cannot jeopardize the best economic development tool we have: public education. To that end, I will not support any tax cut that prevents us from fully-funding the state’s K-12 foundation formula. Period,” he said. “Second, a good way to make sure a tax cut for working families is affordable is to finally reform our state’s most expensive – and least efficient – tax credit expenditures. It’s a question of fairness. For too long, these programs have allowed wealthy developers and special interests to reap massive windfalls at taxpayer expense. Let’s give a break to the working families who need it the most by reining in handouts to those who need them the least.”

And the Governor says he will not support what he calls “tax gimmicks” that reward creative accounting instead of a hard day’s work.

“Some members of the General Assembly continue to propose cutting taxes on what’s called ‘pass-through’ business income,” he said. “There’s just one problem: these tax cuts primarily benefit well-heeled corporate partnerships like law firms, and there is no evidence, anywhere, that these schemes do anything to create jobs. If the legislature is serious about giving tax relief to ordinary Missourians who need a break – they need to shelve these giveaways to the lawyers and lobbyists who don’t.”

Nixon said he’s told leaders in the House and Senate that if a bill gets to his desk that violates any of those principles, he will not hesitate to veto it.

Kraus said the agreement will provide broad-based tax relief to the people of Missouri and protect funding for our public schools.

“The principles upon which this agreement is based – fully funding the foundation formula, reforming inefficient tax credit programs, and giving working Missourians a tax cut – provide a solid framework for a bill that members of both parties can agree on” Kraus said.

Kraus said his bill would provide a .25 percent reduction to the individual income tax rate effective only after the K-12 foundation formula is fully funded and only after $200 million in revenue growth. The legislation would provide an additional .25 percent reduction to the personal income tax rate effective after legislation is enacted to reduce low income housing tax credits to $110 million annually and historic preservation tax credits to $90 million annually.

AUDIO: Nixon lays out his plan at the Missouri Press Association luncheon. (6:43)