Missouri was one of the first states to consider installing a program to monitor prescription drug sales. Now it’s one of the last to still be considering it. 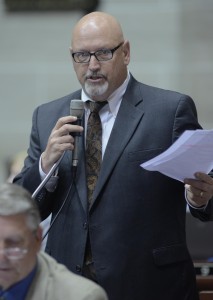 Representative Kevin Engler (R-Farmington) tells his fellow legislators Missouri is the last state in the union to not have a prescription drug monitoring program, the intent of which is to stem one way abusers of prescription drugs get their supplies.

Engler says even Guam has such a program in place.

“We have turned into the doctor shopping capital of the country,” Engler tells his fellows in presenting his proposal, HB 1133.

“The incidence of death and overdose, in several studies,” Frederick says, “have shown that it really doesn’t go down in states that have a prescription drug monitoring program.”

Frederick sponsored such a proposal in 2011 and 2012 before opposing it now. He agrees with other critics who have expressed fears that the proposal would result in a database of Missourians and their prescriptions that could be used for things lawmakers don’t intend.

“With the reach of executive branches of government now,” Frederick says, “it’s just the stroke of a pen or a call on a telephone that can repurpose a law that we pass to accomplish other goals.”

Frederick tells lawmakers, “Perhaps one day you walk in to buy a firearm or some ammunition and they see the list of medications you’re on and no firearm for you, no ammunition for you today.”

Engler argues those databases already exist except for those who pay for prescriptions with cash.

The legislation has received one favorable vote in the House. Another would send it to the Senate, where it failed two years ago after a filibuster.