You are here: Home / News / Two articles of impeachment filed against Governor Nixon (AUDIO/COPY OF THE ARTICLES)

A state representative who said he would file articles of impeachment against Governor Jay Nixon (D) has made good on that intent. 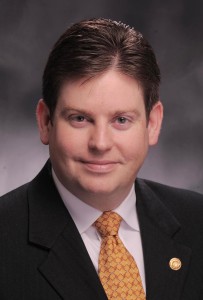 Representative Nick Marshall (R-Parkville) has filed two articles of impeachment. He says Governor Nixon’s executive order instructing the Department of Revenue to accept joint tax returns filed by same-sex couples legally married in other states “is a direct violation” of Missouri’s Constitution. Further, he says Nixon “misstates and misrepresents the meaning and requirements under Missouri’s constitutional and statutory law and thereby misleads the citizens of this state.”

Read the articles of impeachment filed by Representative Marshall

Marshall notes that in 2004, 72 percent of Missouri voters approved Constitutional Amendment 2 to change to the Constitution to define marriage as being between a man and a woman. He asserts in his filing that Nixon’s action “results in a recognition of same-sex marriage by the State of Missouri.”

Marshall, in his filing, alleges that Nixon’s assertion was based on “a knowing omission of key statutory language.”

Specifically, in the section of Missouri tax code that defines terms, it reads that terms used shall have the same meaning as when they appear in federal tax code. Marshall seizes on the phrase, “unless a different meaning is clearly required by the provisions of,” Missouri tax code.

Marshall tells Missourinet, “Missouri law says a husband and wife who file a joint federal tax return shall file a combined return here in he state of Missouri. The condition precedent for that is that they are husband and wife, and you have to ask yourself, ‘Well, how do you define husband and wife?’ You may not use the federal definition. That’s not allowed because Missouri’s Constitution does not allow you to recognize same-sex marriage.”

Moon (R-Ash Grove) has said he will seek to impeach Nixon for not acting quickly enough to set special election dates for vacant seats in the House and one in the Senate.  Moon told Missourinet earlier this week he would file articles of impeachment this week, but that has not happened and calls to his Capitol office today have not been answered.

Articles of impeachment move through the legislative process in the House similarly to the way a bill would. They would have to be first referred to a committee. If the the articles are passed in the House, Nixon would be tried by a commission of seven jurists elected by the Senate.

Marshall says he is opposed to same-sex marriage, but says his action has nothing to do with his stance on the issue.

Marshall says if joint tax returns filed by same-sex couples are to be accepted in Missouri, the law or the Constitution must be changed.

“I think it could be revisited,” says Marshall, referring to the 2004 ballot issue that defined marriage in Missouri’s Constitution as being between a man and a woman. That issue was approved by 72-percent of Missouri voters. “I think one could make the arguement that attitudes have changed in the State of Missouri. I would not oppose another ballot question to examine the issue.”

Listen to an interview with Nick Marshall:  11:53