You are here: Home / Sports / Defense the big issue for Haith in Tigers loss to Kentucky (AUDIO) 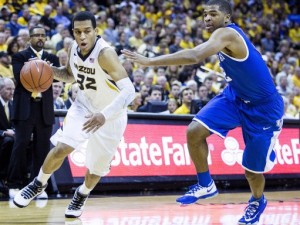 Jabari Brown drives to the basket during the Tigers game vs. Kentucky (photo/Mizzou Athletics)

Missouri head coach Frank Haith admits, the team needs to find way to get points inside, but Mizzou still shot 53% for the game and score near 80 points. The issue for Haith was the Tigers defense as they dropped an 84-79 final to the Kentucky Wildcats, Saturday afternoon at Mizzou Arena.

Jabari Brown finished with a career-high 33 points and Jordan Clarkson scored 28 to keep Missouri (16-5, 4-4) in the game. Clarkson’s layup with 51.9 seconds left cut the deficit to 80-77, but Aaron Harrison answered with a layup 30 seconds later to end the threat. Harrison scored 21 points and James Young added 20.

Earnest Ross and Jonathan Williams III ran into foul trouble in the first half and played five and eight minutes combined. Kentucky outscored Missouri 14-6 over the final five minutes to take a 43-32 lead at the break.

Missouri’s frontcourt only mustered three points. The rest of the scoring was left to the back court…mostly Brown and Clarkson. Ross finished with eight points in 25 minutes of action.

Haith said he didn’t want to risk Ross getting his third foul in the first half with the physical nature of the game, but against Kentucky, (and hindsight is always 20-20) having Ross on the bench hurt Mizzou late as Kentucky built that lead, that grew to 16 in the second half.  Mike Reeves and I discussed that first half decision of not playing Ross more in the first half.