The House Budget Committee is not likely to put $14-million dollars in the supplemental budget toward a new state mental hospital at Fulton as Governor Jay Nixon (D) has proposed, but the House will support a way to pay for it this year.

That’s according to Representative Rick Stream (R-Kirkwood), the chairman of the House Budget Committee, which held a hearing on the Governor’s proposal Wednesday morning to explore whether it is constitutional and gather more details on it. 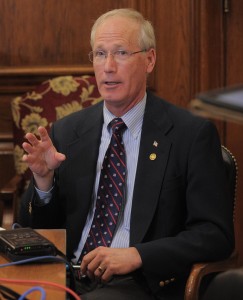 Stream says one thing he thinks after that hearing is that there is no need to put money in the supplemental budget, which lawmakers observed is primarily intended for emergencies and unforseen needs.

“No dirt is going to be turned on any project, whenever its approved, until next spring,” Stream says of the plans for a new Fulton hospital. “So, I don’t think we need to put anything in the supplemental.”

Nixon proposed putting that $14-million in the supplemental budget as the first payment on the debt the state would incur if the legislature moves forward with his plan, to issue about $189-million in appropriation bonds. Nixon proposes another $14-million be put in the fiscal year 2015 budget that the legislature will approve later in the session, that would have been the second payment.

Stream says he still has questions as to whether Nixon’s plan to use appropriation bonds is constitutional. Some lawmakers, led by Representative Chris Kelly (D-Columbia), say there is no provision in the state Constitution allowing for the use of those bonds, which if authorized by the legislature would be issued without a public vote.

But, Stream says, that remains an option.

“If we were pushed against the back wall and that was the only option I think we would probably go with it,” says Stream. “We want this project to move forward. It’s a desperate, desperate need to [build a new state mental hospital at Fulton].”

Stream says the other two options are to pursue the issuance of revenue bonds, which would require a public vote, or to simply appropriate the money for the hospital in the next three fiscal years’ budgets.

Whichever option is chosen, Stream says, is the only question.

“We’re going to make a decision this budget year,” says Stream of finding a way to pay for a new Fulton state mental hospital. “Certainly in the House. I can’t speak for the Senate but in the House, we’re going to vote out some type of a proposal.”