You are here: Home / Sports / Blues get back at Devils, move into first place 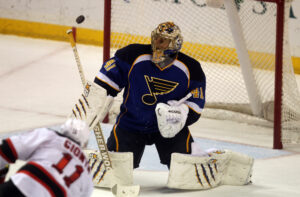 After suffering their worst defeat of the season, a 7-1 loss at New Jersey on Jan. 21, the St. Louis Blues got their revenge on the Devils in a 3-0 victory Tuesday night at Scottrade Center in St. Louis.

Jarsoslav Halak stopped 23 shots for his fourth shutout of the season, and the Blues got goals from Alexander Steen, Brenden Morrow and Maxim Lapierre to improve to 36-11-5.

The victory, combined with the Chicago Blackhawks’ 5-4 overtime road loss to the Calgary Flames, moved the Blues into first place in the Central Division. The Blues and Blackhawks each have 77 points, and St. Louis has three games in hand.