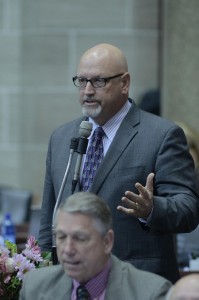 “They’re out there,” Representative Kevin Engler (R-Farmington) says of websites dedicated to this particular genre of pornography, and he tells a House committee there is nothing in Missouri law that defines posting images or videos of an ex on them as a crime.

“In several cases, women knew that [their former partners] were going to do this,” Engler tells fellow lawmakers. “They were in a long-term relationship and maybe they took a video, or they had taken pictures, or they had taken one of these glamor calendars in semi-nude, and the lover or spouse had told them they were doing to do that. They go to the police and the police have no basis to stop them.”

Engler says he knows of a case in which it happened to a teacher in his district.

“Now if you’re going to live in a town my [town’s] size,” says Engler, “and you’re going to be a grade school teacher and you had this happen, tell me that would not be devastating to you. Yet, we have no law that deals with it.”

Engler says it is because of the extent of embarrassment and damage that can occur to people in these instances that in his bill (HB 1203) he proposes making the crime a class “D” felony, which carries a maximum penalty of four years in prison.

Not everyone agrees with Engler, however. Representative Mike Colona (D-St. Louis City) says a new law is not necessary.

Colona says such a crime would be particularly hard to prove in domestic dispute cases.

No vote has been taken on the legislation.