Representatives in the Missouri House have been greeted in the first two weeks of the legislative session by a display honoring Missouri soldiers who have died in service to the country since September 11, 2001. 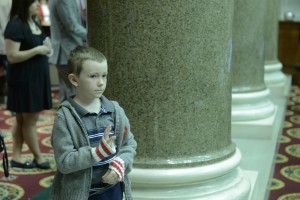 The Remembering Our Fallen display for Missouri currently has pictures of 147 military men and women. It was in the third floor of the State Capitol Rotunda on either side of the legislator’s entrance to the House.

The son of one of them has been recognized in the House by a state legislator. Wesley Settle was two months old when his father, Marine Lance Cpl. Darin Settle of Henley, was killed in a motor vehicle accident in Iraq in April, 2006.

Settle’s father, Jim Settle of Henley, says the memorial is a comfort.

“It is nice to see that people still remember and that these guys … him and the others … are still being remembered.”

The first 13 pictures below are of the Remembering Our Fallen display and Welsey’s visit to the Capitol:

Wesley thought being recognized on the House Floor was “pretty cool,” but says he didn’t know too much about the display or its pictures.

“I know that my dad’s on one of them,” Wesley tells Missourinet.

“I think [Wesley] will appreciate it more in the future probably, than today,” Jim says. “I hope that he comes to understand the importance of what his dad did … at some point.”

Jim thinks efforts like the Remembering Our Fallen display will help Wesley, and others, understand.

“All of them still serving,” says Jim, “We need to appreciate them and not ever forget that they’re protecting us from whatever we determine is a threat.”

The Remembering Our Fallen display for Missouri can be seen starting today thorough January 31 at the Macon Public Library. See a schedule of additional tour stops here.