You are here: Home / Sports / Cardinals sign Shannon to multi-year deal behind the mic 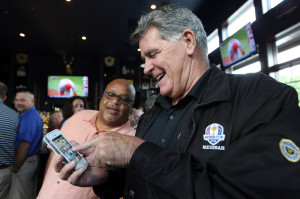 “Mike’s voice has become the soundtrack to St. Louis baseball,” said Cardinals President Bill DeWitt III. “We look forward to having him back in the booth this season and for years to come.”

As in years past, Shannon will join fellow broadcaster John Rooney for the majority of Cardinals games on KMOX and the Cardinals Radio Network (125 affiliates), with the exception of approximately 50 road games in 2014. Former Cardinals and FOX Sports Midwest personalities Rick Horton and Al Hrabosky will broadcast the games with Rooney in Shannon’s absence.

In addition to game duties, Shannon will continue his involvement with pre-game and post-game shows, call-ins segments for KMOX during the morning shows throughout the year, and host the “Live at Shannon’s” show at Mike Shannon’s Steak and Seafood after every Tuesday and Friday home game starting on Friday, April 11.

2014 marks Shannon’s 56th year as part of the Cardinals family and 42nd year manning the Cardinals broadcast booth since first hitting the airwaves in 1972. Throughout his tenure as the Voice of the St. Louis Cardinals, Shannon has also made appearances for the Cardinals television broadcasts, including as a pre-game analyst for Fox Sports Midwest. A St. Louis native, Shannon played for the Cardinals from 1962 to 1970, a span that included two World Championships (’64 and ’67) and a National League pennant in 1968. In 1999, Shannon was inducted into the Missouri Sports Hall of Fame in recognition of his on-air career as well as his contributions on the field during his career as a player. In May 2013, Mike was named the Missouri Sports Hall of Fame’s 26th Missouri Sports Legend in Springfield, Missouri.