Authorities in the southeast Missouri town of Anderson are still looking for a 6-month-old boy believed to have been abducted by his father, January 2. They have now released a picture of the infant, Mitchell Farris, posted with this story. 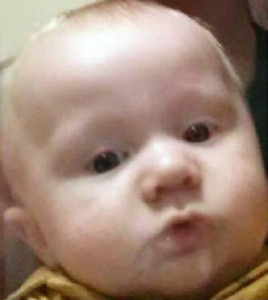 6-month-old Mitchell Farris is believed to have been taken by his father, Preston, on January 2.

Police think 34-year-old Preston Wayne Farris took the boy from an apartment where he had been in the care of his great-grandfather, whom the Division of Family Service had placed the child with. Farris is believed to be with the boy’s mother, Anastasia Lynn McDaniel.

For descriptions and pictures of Farris, McDaniel and the vehicle they are believed to be in, see our earlier story.