The House Speaker in his opening day address reaffirmed a strong stance against changing Missouri’s school transfer law, but his budget director is going to propose a bill to do just that. 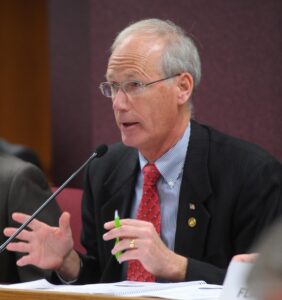 In his legislative address on opening day he said, “Removing the opportunity and choice for a great education that some children have now for the first time in generations is the height of cynicism and should not even be considered.”

Many lawmakers think changing the law is a priority, though, saying it threatens to bankrupt some school districts and stretch or exceed the resources of others. One of them is Jones’ Budget Director and a fellow Republican, Rick Stream (R-Kirkwood), and he plans to file a bill next week proposing changes to the law.

“They’ll run the range … the whole gamut of options,” says Stream. “Simple things like additional mentoring or after school programs, pre-K, expanded school day, expanded school year, summer school, merit pay for teachers, all the way to the very other end of tax credits and vouchers.”

Stream doesn’t expect any resistance from Jones despite the stance the Speaker has espoused about changing the transfer law.

“I think the Speaker will certainly be respectful of caucus members,” Stream says. “He always has been, and if caucus members come to him with an issue that’s important in their district he is more than happy to certainly look at it and support it if he thinks it merits it.”

Stream served during the summer on the interim committee on education as did Representative Margo McNeil (D-Florissant) , who will file the House Democrat version of transfer law changes.

Listen to the full interview with Rick Stream, 19:46