Missouri finished 2013 with a temperature average one degree cooler than the long-term average of 54.6 degrees Farenheit. The state’s climatologist says that’s quite a change from 2012, which was four degrees warmer than normal on average. 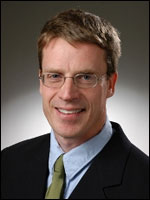 Pat Guinan says in Missouri temperature records going back to 1895, that’s a first.

See more on Guinan’s summary of December and 2013

The other notable thing about Missouri weather in 2013, says Guinan, was its precipitation disparities. The year began with drought in much of the state that was alleviated by January and February precipitation, but soon the drought returned in the northern half of the state. Parts of southern and central Missouri saw 15 to 20 inches of rain in August that resulted in flooding, while parts of north Missouri recorded no rainfall that month. 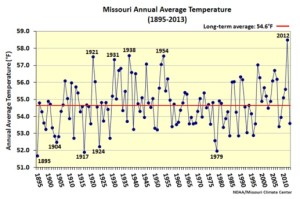 This graphic illustrates the average annual temperature in Missouri from 1895 through 2013.

He says if 2013 had been warmer, the drought would have been worse.

“In 2012 of course, we had the heat in combination with the lack of precipitation. That really drove the drought … gave it some teeth,” Guinan says. “In 2013 we did not have those extreme high temperatures. In fact if anything they were fairly cool. We had a lot of cloudy days during the summer of 2013 and that mitigated the drought potential that we saw across northern Missouri.”