Governor Jay Nixon has stressed some of the ideas Republicans have pushed for reforming Medicaid in renewing his call for expansion of the program’s eligibility using federal money. 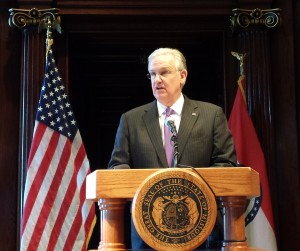 Nixon says 4.4 million Americans with jobs but no health insurance coverage will have that coverage beginning today, but says “the legislature’s inaction” means nothing has changed in Missouri.

“Missouri’s Medicaid system will operate as it has for years without additional needed reforms, protections for taxpayers or new measures to promote personal responsibility, many of which are being granted for the first time in states that are moving forward.”

He says Republicans and Democrats in states like Arkansas, Illinois, Iowa and Kentucky advanced, “common sense, market-based approaches to helping low-income working families afford the basic health care services they need to live healthy lives,” and he called on lawmakers to resolve to pass a bill to “strengthen and reform Medicaid the Missouri way.”

Nixon, who began calling for Medicaid eligibility expansion at the end of November 2012, didn’t use the word “expansion” in his address to reporters on Tuesday, instead referring to “strengthening and reforming” the program.

He also said he supports some of the ideas that have been discussed by Republican lawmakers for reform including accountability language that would give recipients some “skin in the game,” a term often used by Representative Jay Barnes (R-Jefferson City). Barnes authored a Medicaid reform bill in 2013 and is expected to introduce a 2014 bill, after chairing one of two House interim committees on the topic.

“Folks shouldn’t show up at an emergency room with a stuffy nose,” says Nixon.

One idea he did not express support for is eliminating coverage for children of low- to middle-income families whose incomes make them eligible to buy federally subsidized insurance policies.

“It’s really hard to tell a 5-year-old to go get their lunch bucket and get to work and make some money so that they can pay health premiums,” Nixon says. “I will look very carefully at anything that deals with children.”

Some lawmakers on Barnes’ committee including Republicans were also cool on that idea but some Senate Democrats say they would not rule it out.