UPDATE 3:30pm:  The HighwayPatrol reports an accident at 8:43 this morning in Henry County has left a Deepwater man dead.  80-year-old William Dulaban’s vehicle slid out of control across Route Z and struck a tree.  He was pronounced dead at the scene.

UPDATE:  A woman has died in a traffic crash in Raytown early Saturday morning.  Police are investigating the rollover accident.  The name of the victim has not been released.

The Highway Patrol reports eight people have died in weather-related accidents on Missouri roads since shortly before 7:30 Friday morning. 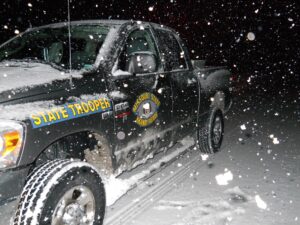 Captain Tim Hull says the Highway Patrol staged 4-wheel drive trucks like this one to be ready to respond to traffic crashes and to assist motorists during recent winter weather.

Captain Tim Hull with the Highway Patrol says temperatures were at or just below freezing yesterday and caused moisture on roads to freeze. Sleet and freezing rain also fell followed by snow, making for hazardous driving conditions.

He calls those deaths “tragic.”

“Especially this time of year … that’s eight families, eight extended families that are going to suffer the loss of a loved one forever. That’s eight individuals who are not going to get to experience Christmas this year with their families.” Hull says, “Our hope is that motorists will learn from these situations … if you don’t have to get out, don’t, in these kinds of weather conditions.”

Hull says among the fatal accidents and numerous other crashes throughout Missouri in the last 24 hours, there have been common themes.

“Going just a little bit too fast for the conditions or not paying close enough to the conditions,” Hull says, “and then before you know it the vehicle loses control and goes off one side of the roadway or the other and strikes and object or overturns, or in a couple of cases … they slid and crossed through the median and struck another vehicle or a vehicle struck them because they were in the wrong lane.”

Hull says he hopes that total doesn’t increase, but he says more crashes have occurred as snow fell in much of the state Saturday morning with totals as high as 9.7″ in St. Charles County.

According to Patrol crash reports, in an accident at 7:55 Friday morning in Camden County a Camdenton woman, 42-year-old Karla Brown, died when her vehicle slid on ice and traveled into the path of a van going the opposite direction. At 9:35 on Highway 63 south of Rolla 16-year-old Charity Adams of Licking died when the car she was riding in went out of control on ice, hit a guard rail and flipped. In Osage County 68-year-old Jerome Hinrichs of Wildwood was killed when his vehicle left the road, hit a tree and rolled along Highway 50 at about 11:45.

Also at 11:45 in the Patrol says 19-year-old Cody Ricker of Holts Summit was killed when he lost control of his vehicle and it crossed the median of Highway 54 in Callaway County, where it was hit by a van going the opposite direction. On Highway 100 in Franklin County a Herman woman, 23-year-old Whitney Gabathuler, was killed when just before noon another driver lost control of his car on an icy bridge and it struck the front of hers. The driver of the other vehicle was seriously injured.

Seven vehicles including three tractor-trailers were involved in a crash at 4:50 Friday afternoon on Interstate 44 west of Halltown that left a Joplin man dead. Witnesses said the chain-reaction collision happened when one car swerved to avoid a previous accident. In the resulting pileup, 44-year-old Matthew Cozad of Joplin was killed, one person was seriously injured and several sustained minor injuries.

A St. Louis woman died in a four-vehicle accident at about 7:30 Friday evening on I-44 in St. Louis County. The Patrol says Margie Oshaughnessy was driving east in the westbound lanes of the Interstate when her car was struck head-on by another vehicle, causing a chain-reaction. The driver of the car that hit hers was seriously injured.

Clay County authorities say icy conditions also caused an accident in Kearney that killed the driver of a truck transporting propane just after 9:00 Friday morning. The name and age of the victim in that crash have not been released.