The state has carried out the execution of a man convicted of the murder of an Excelsior Springs businessman that had stopped to help him and two friends when their car stalled on Interstate 70 in 1994. 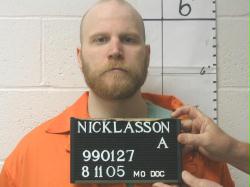 Allen Nicklasson, 41, was pronounced dead at 10:54 p.m. Wednesday, just over an hour before the warrant for his death would have expired. It was the second lethal injection in Missouri in three weeks.

Officials at the Eastern Reception, Diagnostic and Correctional Center began the execution process at 10:05 p.m. Five grams of pentobarbital was injected at 10:44. Nicklasson appeared to be asleep throughout the process. Approximately two minutes after the injection he took several deep breaths, before breathing stopped at about two minutes later.

He was described by state officials as being cooperative and very calm throughout the process.

Nicklasson was sentenced to death in 1996 for the murder of Richard Drummond, whom Nicklasson and two other men forced at gunpoint to drive from east of Kingdom City where he found them in a stalled car, to a county road in Lafayette county. Nicklasson took Drummond into a field, told him to say his prayers and then shot him twice in the head.

One of the other men in the car that day, Dennis Skillicorn, was executed in 2009 for his role in the crime, though Nicklasson had lobbied for his sentence to be reduced saying he had acted alone in the murder. The third man, Tim DeGraffenreid, led authorities to the body and pled guilty to second-degree murder. He is serving a life sentence in prison in another state.

Nicklasson and Skillicorn also killed a couple in Arizona who offered them help when their car became stuck in the desert there.  They were sentenced to life in prison in Arizona.

Nicklasson had been scheduled to be executed on the morning of October 23 in what was to have been the state’s first use of the anesthetic propofol as an execution drug. His execution was delayed amid controversy about the use of that drug.

Missouri Department of Public Safety Spokesman Mike O’Connell says Nicklasson made no final statement and had requested that his body be cremated and designated a person to receive his ashes. He was not given a sedative before the procedure, but did pray with the prison chaplain for 2 or 3 minutes about 20 minutes prior to his execution. The only witnesses to the execution were two members of the media, three private citizens and Department of Corrections officials.

The execution had been scheduled for 12:01 a.m. Wednesday but was delayed since Tuesday night as the U.S. Supreme Court considered a stay of execution placed by an appeals court on Monday over concerns about his counsel in 1996. The Court returned its decision to vacate the stay late Wednesday night and Attorney General Chris Koster informed the Department of Corrections at 10:43 p.m. that there were “no legal impediments” to the execution.

Governor Jay Nixon had earlier denied a petition for clemency and at 10:44 told prison officials there was no reason not to proceed with the process, and the injection began less than a minute later.

The Missouri Supreme Court has set an execution date of Jan. 29, 2014 for Herbert Smulls, who sentenced to death for the 1991 murder of a couple who owned a St. Louis County jewelry store.