You are here: Home / Sports / Matheny makes passionate case for doing away with home plate collisions 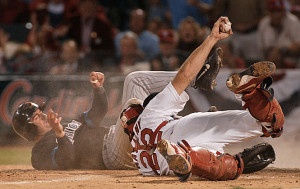 Mike Matheny laid it on the line when he played for the Cardinals. Now as a manager he wants to see player better protected.

Cardinals manager Mike Matheny has been a big proponent of doing away with collisions at home plate and he spoke at Major League Baseball’s winter meetings on the affects that concussions have had on him after  the former catcher’s baseball career ended.

Now, MLB is making plans to ban those plays and it could happen as early as 2014. How the rule will be implemented is still being discussed, but it needs to be voted on by the owners at their next meeting in January and then approved by the player’s union.

ESPN is reporting that some of the rules being considered are:

• Catchers will not be allowed to block home plate.

• Runners will not be permitted to target the catchers.

• The question of whether or not the plate was blocked or the runner targeted the catcher will be reviewable by the umpires.

• Catchers or runners who violate the new rules will be subject to disciplinary action.

What that disciplinary action would be is still be ironed out.  The new rule must pass the owner’s vote at their next meeting in January and it must gain approval by the player’s union.