Convicted killer Allen Nicklasson, 41, awaits a decision from the U.S. Supreme Court to see if he will live another day. The death warrant issued by the Missouri Supreme Court is in place until 11:59 p.m. tonight, Dec. 12, so Nicklasson could be put to death by lethal injection anytime until then. 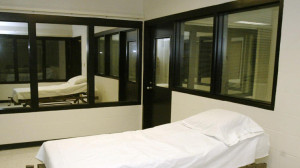 If that time comes and goes, the State Supreme Court would have to set a new date for his execution.

A convicted murderer is still alive at this hour as the state awaits action by the U.S. Supreme Court.

A federal appeals court issued a stay on the execution yesterday, which was appealed by Missouri Attorney General Chris Koster. The U.S. Supreme Court has indicated there are no judges on the bench as of this afternoon, but the high court has not issued a ruling on the matter either.

Public Safety spokesman Mike O’Connell says the prison in Bonne Terre is still at a heightened state of security but everyone is awaiting word from the Attorney General and the U.S. Supreme Court.”

Nicklasson was sentenced to death in 1996 for the 1994 murder of Richard Drummond, a businessman who had stopped to help Nicklasson and two other men whose vehicle broke down on Interstate 70. One of those men, Dennis Skillicorn, was executed in 2009 for Drummond’s murder. The third, Tim DeGraffenreid, is still in prison. Nicklasson and Skillicorn also killed a couple in Arizona who offered them help when their car became stuck in the desert there. They were sentenced to life in prison in Arizona.

Nicklasson had been scheduled to be executed on the morning of October 23 in what was to have been the state’s first use of the anesthetic propofol as an execution drug. His execution was delayed amid controversy about the use of that drug. He is set to die by a lethal dose of pentobarbital.

AUDIO: Q & A with Jessica Machetta, Mike Lear, about the situation at the prison in Bonne Terre. (2:25)