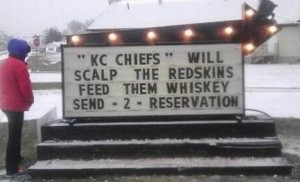 The state of Missouri found its way back into the national media. We must come across as one of the most offending states in the union. First, we created national headlines at the state fair with the rodeo clown, now a Chiefs fan and restaurant franchisee in Belton, Mo., has the corporate office offering up apologies.

However, on Sunday, Patrick Lenow, vice president of public relations at Sonic, told NBC news, “The remarks posted on this message board were wrong, offensive and unacceptable … In a misguided effort to support hisfootball team an independent franchise owner allowed passion to override good judgment. The owner has reinforced with his employees the boundaries of what is acceptable and unacceptable. On behalf of the franchise owner and our entire brand we apologize for the offensive remarks.” Lenow added that the sign was up for only a few hours and that the employee who created the sign was “very apologetic.”