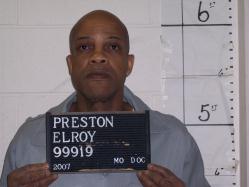 Elroy Preston, his paraplegic brother Ervin, Preston’s girlfriend, and another couple, PeeWee Richardson and girlfriend Betty Klein, had been drinking extensively one night in 1980 in St. Louis when they argued about whether Richardson could have some fried chicken. Elroy Preston told Richardson and Klein he was going to kill them as soon as he took off his clothes so he wouldn’t get blood on them. He stabbed Richardson five times and nearly beheaded Klein.

Testimony later showed he then took some of the chicken, dipped it in their blood, and ate it enthusiastically.

Preston was scheduled for execution on January 28, 1998. But then-Corrections Director Dora Shriro notified Governor Carnahan that Preston no longer had the mental capacity to understand the nature and purpose of the punishment. State law requires condemned inmates to have that capacity.

Carnahan issued a stay five days before the execution and ordered that it continue until it could be determined that Preston was again competent to be executed. A circuit judge in Washington County ruled in 2002 that he was not mentally competent.

Preston never regained that capability. He was 59 when he died this morning at the prison where he was to have been executed almost sixteen years ago.