Unusually mild weather for December will continue today, but starting tomorrow, winter weather is coming in with a vengeance. The National Weather Service is telling folks to be prepared.

The National Weather Service hubs in Missouri are reporting that a cold front will move through the state tonight, ushering in a polar airmass that will persist through the weekend. That means all sorts of winter weather for most of the state beginning Thursday, Dec. 4.

Andy Boxell is a meteorologist with the National Weather Service in Springfield. He says it looks like the worst of it is expected to be along the Interstate 44 corridor, with higher precipitation amounts to the South. But he says it’s too early to tell exactly what kind of winter precipitation will fall where, and how much. Boxell says just a few degrees difference can change the entire outlook. He’s asking everyone to watch the forecasts and be prepared. For now, it looks like rain and freezing rain will dominate the southern portion of the state, with sleet south of Interstate 70 and snow blanketing the center of the state, stretching from Kansas City to St. Louis. However, the system stretches far beyond Missouri, from Oklahoma and Arkansas, through Missouri, and into Illinois and Ohio.

Boxell says the wintery mix of precipitation will be followed by extremely cold temperatures this weekend, with single digit readings and below-zero windchills.

Now is the time to take winter weather precautions if you haven’t already … stocking up on salt, weather proofing your vehicle, and making sure your pets have indoor accommodations.

Mild, dry weather will continue through Tuesday with above normal temperatures. Patchy dense fog covers a large part of the state this morning. A cold front will move through the region tonight bringing much colder conditions. A chance of snow is possible Thursday and Friday mainly along and south of the Interstate 70 corridor, with the highest totals expected over southwestern Missouri. 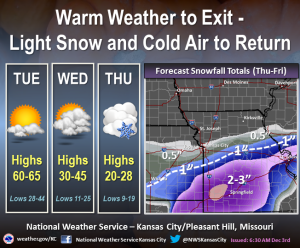 After seeing above normal temperatures early this week, a strong cold front will move through the area on Wednesday. Much colder air will move into the area behind the front. A wintry mix of snow, sleet and freezing rain will develop from southeast Missouri into south central Illinois on Thursday with a band of snow to the north. The chance of snow will continue over the area into Friday. Well below normal temperatures are expected through next weekend as an arctic high settles over the Great Lakes. 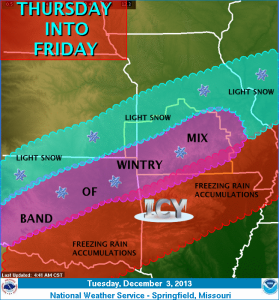 A mix of winter precipitation and much colder temperatures will impact the region Thursday into Friday. Accumulating winter precipitation is expected but the exact precipitation type and amounts remain uncertain. Very cold weather will continue through the weekend with another chance of winter weather on Sunday. An episode of snow, sleet, and freezing rain is forecasted over extreme southeast Kansas and the Missouri Ozarks. Most of the region will experience light to moderate snow accumulations. Meanwhile, areas of far southern and south central Missouri will have a risk for freezing rain, leading to ice accumulations. 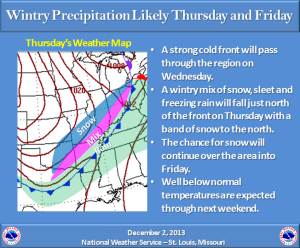 Considerable winter weather impacts will be possible for some areas Thursday night through Friday. Mainly rain is expected Thursday. However, colder air will spread southeast across the area, so that by Thursday evening, a transition to freezing rain or sleet is forecast into southeast Missouri and southern Illinois. Late Thursday night, the transition to wintry precipitation should extend to about the Ohio River, with wintry precipitation developing across the rest of west Kentucky through the day Friday. It is still too soon to forecast specific amounts given the complexity of this storm system. However, the potential does exist for moderate accumulations of ice and sleet, with some snow possible, across portions of the region. 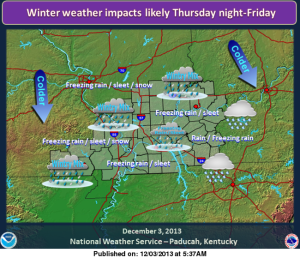 Previous Post: « Pinkel a finalist for national coach of the year
Next Post: How can Missouri shutdown Auburn’s run game? They can’t (Google Hangout) »