Boeing is keeping its cards close to its vest in the negotiations for an assembly contract with the Boeing plant in St. Louis, the center of this week’s special legislative session called by Gov. Jay Nixon. So close, in fact, the company declined to go on tape or camera to discuss what it’s looking for in anchoring production of the 777x series. 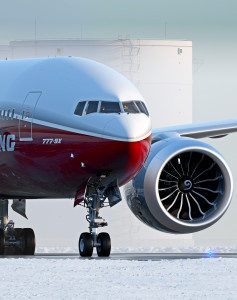 A spokesman for Boeing’s commercial hub in Seattle, Wash., would say only that the company is looking closely at more than a dozen locations to assemble the 777x, but those locations are not being publicly identified. It’s not clear at this point if all of those dozen or more locations are in the United States.

It is clear Missouri is one of those locations, and that it would have preferred to keep production of the commercial aircraft in Washington.

He says the 8-year contract extension would have made sense to both Boeing and its customers, who would have been assured a steady supply chain with no threat of a strike.

“Also, in our eyes, it would have been good for workers here,” he said. “It would have sustained thousands of local jobs here through 2022.

Alder says Boeing has a lot of attractive facilities, including the one in St. Louis, “but we’re also looking at all options, outside the company as well. In the end, we’re going to do what makes sense for us to make sure we stay competitive in the marketplace.”

Staying competitive means, among other things, staying ahead of Airbus, based in Blagnac, France. 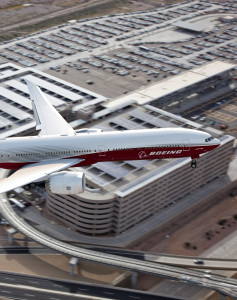 “We’re looking at our competition, namely Airbus, which is striving to take more and more of the market-share,” he said. “And unless we’re able to offer the best product at a price for our customers, then we’ll be in trouble.”

Boeing has put out a request for proposals, and Missouri will answer that call when legislators hammer out a deal on corporate tax breaks sometime this week. The deadline to submit a proposal is mid December. Boeing will then make a final decision around the first of the year.
Alder says Missouri could get the bid to produce all or some of the plane.

For instance, he said, if you look at the 737, the fuselage comes by rail from Wichita, Kansas, to Washington. The wings come from Japan.
The company has already promised more than 250 of the planes to four airlines, three of them in the Middle East.

Emirates Airlines, based in Dubai, has ordered 150 of the aircraft. Qatar Airlines and Etihad in Abu Dhabi have ordered 50 and 25 planes, respectively. Germany’s Lufthansa has committed to purchase 34.

Alder says Boeing expects the popularity of the 777x aircraft to grow in both foreign and domestic markets, noting they are designed for an eight-hour flight.

“You can get almost anywhere in the world in eight hours,” he said, “and the 777 is perfect for that.”