You are here: Home / Legislature / 2nd House Committee to investigate alleged hostility at Department of Agriculture

Two House panels will now be conducting investigations following up on allegations of a hostile work environment at the State Department of Agriculture. 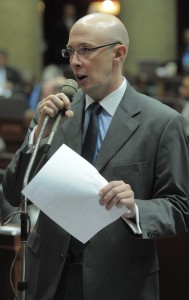 In a statement Jones says, “As this story has continued to evolve in the press I have heard from many Missourians who are deeply concerned by the allegations made against the former department director. Rather than make a rush to judgment on this case, it is imperative that we do a comprehensive review of the way the department has been run and the way its employees have been treated.” Jones continues, “I want the committee to sort through the allegations of impropriety and find the truth of what truly occurred in the Missouri Department of Agriculture. Our goal is to root out any abusive behaviors and to make the department that oversees our state’s top industry the kind of efficient, well-run governmental agency that Missouri taxpayers deserve.”

Jones refers to the departure of Agriculture Director Jon Hagler from the Department in early October the day after a letter was released by a former Department employee accusing Hagler of creating a hostile workplace. Allegations have since been raised that Hagler threatened an executive of the Missouri Cattlemen’s Association. Hagler answered those allegations publicly for the first time in an interview Saturday with Missourinet.

Jones has appointed Representative Stanley Cox (R-Sedalia) to serve on the committee with Guernsey, and says the rest of the committee’s membership will be announced in the coming days. Guernsey says he expects the committee to begin holding hearings later this month.

Jones had already asked the Government Oversight and Accountability Committee chaired by Representative Jay Barnes (R-Jefferson City) to investigate issues at the Department of Agriculture as well as the Department of Labor, where claims have been made of intimidation and discrimination by a former department director.