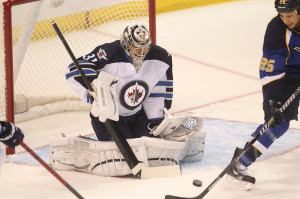 Winnipeg Jets goaltender Ondrej Pavelec keeps an eye on the puck as St. Louis Blues Chris Stewart tries to get his stick on it, in the first period at the Scottrade Center in St. Louis on October 29, 2013. UPI/Bill Greenblatt

Alex Steen’s 11th goal of the season with 59.4 seconds remaining gave the Blues a 3-2 win against the Winnipeg Jets. It also pushed Steen into the NHL lead in goals. Steen took a pass from Jay Bouwmeester in the slot and beat Ondrej Pavelec, with the puck hitting the right post and Pavelec’s backside before going into the net.

Brenden Morrow and T.J. Oshie also scored for the Blues (7-1-2). They’ve picked up points in nine of 10 games this season. Jaroslav Halak stopped 21 shots and improves to 7-1-1 on the season.