Members of the Missouri National Guard were on hand at Busch Stadium to support safety and security during the 2013 World Series games here this week. 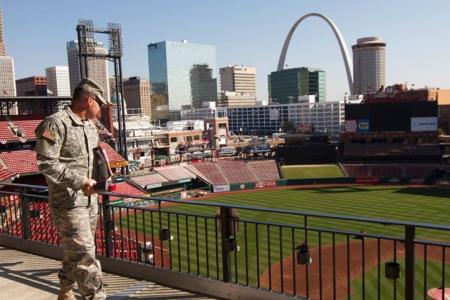 The 7th Weapons of Mass Destruction Civil Support Team (CST), from Jefferson City, assisted local and federal agencies in surveying the area to confirm there were no hazardous materials present.

The team’s goal was to assess suspected or known terrorist threats, advise civilian authorities of appropriate responses, and assist local emergency responders in the event any incidents involving chemical, biological, radiological, or nuclear activity were possible.

According to Sgt. 1st Class Juan Gallego, a reconnaissance noncommissioned officer for the 7th CST, and Eldon resident, five teams walked the entire stadium and took initial readings of radiation. This was completed to establish a baseline for continued monitoring throughout the entirety of the World Series games.

“We’ve walked around the stadium and done some background readings of radiation and will use that information so we can plug the readings into a computer, then during the games if we see any elevated reading we can respond,” said Gallego, who’s working his third World Series mission. “If there’s a spiked reading it will come over the computer. We would then disseminate the information and do further monitoring to make sure the reading is not a threat.”

Walking alongside the Guardsmen were members of the Department of Energy, who were also verifying the possible presence of hazardous materials. Other members of the 22-person unit assisted the St. Louis Fire Department in safety efforts around gate entries at the stadium.

“We work hand in hand with the first responders of Missouri,” said Gallego. “We always have to stand on alert because we’re the first ones they’re going to call.”

The presence of Guardsmen at work also put the minds of attending baseball fans at ease.

“It makes me feel like something is being done and people are looking out for me,” said Chris Endicott, a Cardinals fan from Minnesota.

Dylan Rainey, a Red Sox fan from Oklahoma, agreed with Endicott saying it makes him feel very comfortable knowing there are people in place to help protect him so he can enjoy the game without having to worry.

“We rely on our training and constant professionalism,” said Capt. Richard Sambolin, the operations officer for the 7th CST, and Lake Ozark resident. “We like being able to demonstrate and share our ability with the public.”