Country music entertainer and native Missourian Leona Williams had a stretch of U.S. Route 63 named in her honor Sunday in a private dedication ceremony. The newly christened “Leona Williams Highway” runs through the singer/songwriter’s hometown of Vienna, Mo. 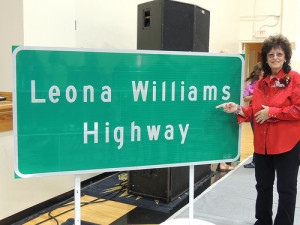 To celebrate the occasion, Leona Williams and her son, Ron Williams, gave a public concert at the Vienna High School gymnasium following the dedication ceremony.

“I never dreamed I’d have a highway named after me,” Williams said. “I’m honored and thankful to receive such an honor. I want to credit my family and friends and the folks in Vienna for thinking so highly of me.”

Active in her family’s band since childhood, Williams landed her first radio show, “Leona Sings” on KWOS Radio in Jefferson City at the age of 15.  Later, she worked as a bass guitarist and backing vocalist in Loretta Lynn’s road band. By 1968, Williams was recording for Hickory Records, where she released several singles, including: “Once More” and “Country Girl with Hot Pants On.”

In 1976, she recorded the album San Quentin’s First Lady for MCA Records, which was the first country album recorded by a female artist inside a prison. She joined Merle Haggard’s road band in the mid-1970s, where she wrote two of Haggard’s No. 1 hits, “Someday When Things Are Good,” and “You Take Me For Granted.” In 1978, the two charted in the country Top Ten with the song, “The Bull and the Beaver.”

She also wrote “Dallas” for Connie Smith and “Get Whatcha Got And Go” for Loretta Lynn. She recorded two more singles for Elektra Records in 1981, and charted another duet with Haggard titled, “We’re Strangers Again.”

In 1999, she was inducted into the Country Music Association of Texas Hall of Fame. She was honored with the prestigious George D. Hay Award in 2002 and was also inducted into the Missouri Country Music Hall of Fame. In 2011, Williams received the Entertainer of the Year Award by Reunion of Professional Entertainers. For the better part of the last decade, she has been headlining some of Branson’s most successful shows.