The next tour of the state by House Speaker Tim Jones will focus on Agriculture. 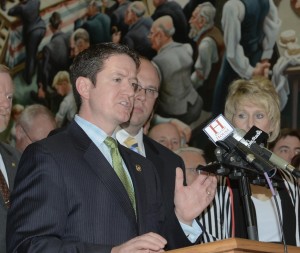 House Speaker Tim Jones says with a family background in farming, he understands how important agriculture is to the state. He says the relationship between issues that effect agriculture and those that effect business is growing stronger all the time.

“Farmers are really becoming quite the entrepreneurs themselves and employing some high technology into their practices as well, so I look at that as not two separate issues but as one very cohesive part of the pie.”

Jones says he wants to highlight the importance of agriculture to the state.

Missouri Agriculture Director Jon Hagler says if the legislature wants to support agriculture, one area it can look to is exports. He says many parts of the globe are showing potential for growth for Missouri ag products.

“When you get up above Highway 36, it’s such a wonderful part of Missouri, such a rich agricultural heritage and they’re experiencing some significant conditions differently than they are south, for example, of I-70. If you look at the weather … the drought conditions that they’ve experienced not just last year but continuing this year.”