You are here: Home / Agriculture / State Fairgrounds to get $2.2M for storm water system upgrades

The State Fairgrounds in Sedalia will get $2.2-million dollars in infrastructure upgrades to its storm water management system. 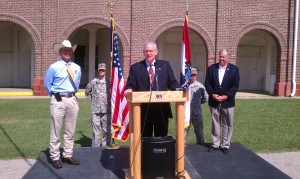 The money will go to fix leaks in the system and improve drainage. State Fair Director Mark Wolfe says rainwater was getting into the Fair’s sanitary system and that was adding to a greater problem for the City of Sedalia, of water levels exceeding what its treatment system could handle.

“We were certainly a major contributor (to that problem) because of the numbers of campsites and the fact that we have some of our major lines out here that are getting old and decayed and were showing signs of cracking and things like that, that was allowing that (additional water) in there.”

Governor Jay Nixon says the work has to be done before other improvements to the Grounds can be made.

“These infrastructure improvements are vital to ensuring that Missouri families can continue celebrating their traditions and making great members of the State Fair well into the future. If we can get this stuff done underground, they lay the structure for us for enhancing the camping experience here, enhancing other facilities around this area, but you’ve got to start from the ground up.”

State Senator Mike Parson (R-Bolivar) says the Fairgrounds must be made to last.

“I truly believe that this is the heart and soul of Missouri right here, right here in Sedalia, Missouri … agriculture, this is where we came from … and for the people that built all of this 100 years ago, a lot of these buildings, it’s our job to make sure we keep that infrastructure in place so for the future generations, for our kids and our grandkids, to be able to enjoy what we’ve had the opportunity to.”

The money comes from the state Office of Administration. Wolfe expects the upgrade to be completed in time for the 2014 State Fair run, August 7-17, and work will continue while other events take place on the Grounds.

Find out more about the Missouri State Fair at its website.