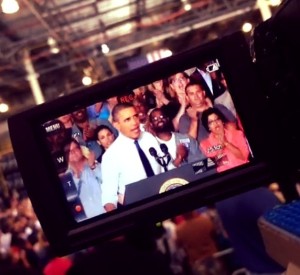 “The only thing tougher than Ford trucks are American workers,” he said to a cheering crows of roughly 400, many of them Ford employees and members of the United Auto Workers.

“When the middle class does well, everyone does better,” Obama says.

He also talked about keeping lower taxes, lessening our dependence on foreign oil, a broken healthcare system that he hopes to see — at least in part — fixed by the Affordable Care Act, also known as Obamacare.

He spent some time talking about Congress and its failure to pass a spending plan — saying, “They do this about every six months, don’t they?” … and expressed a willingness to work with both sides of the aisle to come up with a compromise, whether it be on the spending plan or the healthcare plan.

Obama took time before he spoke to tour the plant, which didn’t shut down completely for the speech. He pointed out that before he was elected to his first term in office, he had just purchased …. a Ford car.

He began his speech by giving a shout out to the Kansas City Chiefs, which he followed by pointing out the Bears’ recent wins.

Back to business, and regarding the actions in Congress, he says, “Nobody gets what they want 100 percent of the time.” Try that when you’re married, you’ll be divorced real fast. Especially you, men, he added.

He says he bought a Ford just months before being elected, but now he’s in a Cadillac with the Secret Service.

The speech was casual, and perhaps appropriately so in the loading dock area of the plant, with big bay doors and thick odors of rubber and motor oil.

“He began the tour with Ford CEO Alan Mulally, company official Todd Jaranowski and UAW official Jeff Wright,” the White House press pool reports. “The president wore a blue shirt and dark blue tie but did not wear a coat. His sleeves were rolled up. He was chewing gum.
The plant was in partial operation during the tour so the conversations were largely inaudible to the pool. The president laughed with his escorts then shook hands with Ford plant workers.

At the end, he promised to keep working for the hard working middle class throughout his term, and to keep pushing for education funding to ensure generations to come could continue the American Dream of doing as well as, if not better, than their parents.

To see Vine videos of the speech, visit @missourinet on Twitter.