The House Speaker says the votes aren’t there to overturn the veto of a tax cut bill. That bill’s sponsor says with the veto session looming, there are still “cards yet to be played.” 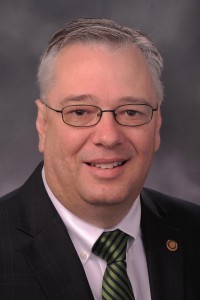 Representative T.J. Berry (R-Liberty) sponsor of a bill that would cut corporate and individual income taxes says he’s looking forward to having the veto session over with. He says he thinks the vote will be very close on whether to overturn the Governor’s veto of that legislation, HB 253.

“There’s a huge difference in veto session versus regular session and there are a lot of people that might say that they’re a yes or no, or maybe. When it comes down to it on the day when you’re taking a vote that counts it will probably be fairly quiet in the chamber and people will be taking their jobs very seriously.”

Berry doesn’t think it will do any good to put any last-minute pressure on party members, urging them to vote for an override.

“I respect the people that have had questions on 253, may be leaning towards ‘No.’ I think at this point working on people is not real productive, but making sure to put as many things on the table as possible is.”

Governor Jay Nixon has been traveling around the state campaigning in support of his veto, telling school officials the bill could cost some districts millions of dollars. According to liberal advocacy group Progress Missouri, 100 school boards in the state have passed resolutions urging support for the veto. Some Republicans have been cited as saying they will not vote to override.

Even so, Berry says the issue will be brought to a vote and he thinks it will be close.

After hearing the Governor spend much time talking about what Republicans have called “drafting errors” in the bill that would raise taxes on prescription drugs and college textbooks, Berry says he still wants the Governor to answer one question.

“If those were fixed, would he sign it? I don’t believe that he would. I think this is one of those philosophical divides where there is a distinct difference between Republicans and Democrats and that he would be against it, but he doesn’t want to say that.”

Berry also wrote a letter to the Governor asking him to call a special session concurrent to the veto session so that those errors could be fixed. Nixon has rejected the idea and calls the request an acknowledgement that there are flaws in the bill. Berry criticizes the Governor for not answering his request privately.