The Highway Patrol says a positive identification has been made, and a body found in Dade County, Mo., is that of 12-year-old Adriaunna Horton.

The patrol says at approximately 1:50 p.m., on Wednesday August 21, a body was located by law enforcement officers in a wooded area southeast of Golden City, in rural Dade County, near the Barton County Line.

“The body has been positively identified as missing 12-year old, Adriaunna Horton,” the patrol reports. “Horton was reported missing on Monday, Aug. 19, at approximately 5:30 p.m., when she was last seen getting into a vehicle near Hazel Park in Golden City. The Missouri State Highway Patrol, the FBI, the Barton County Sheriff’s Department, officers with the Southwest Missouri Major Case Squad, and several other area law enforcement and fire agencies, along with several hundred volunteers, searched the past three days until the body was located. The Patrol’s helicopter and marine operations officers were also utilized during the search.”

A final news briefing is set for 1:30 p.m. today in Barton County.

“This investigation into the death of Adriaunna Horton continues,” the patrol says. “Anyone with information regarding this investigation is asked to contact the Barton County Sheriff’s Department at (417) 682-5541 or the Missouri State Highway Patrol, Troop D Headquarters at (417) 895-6868.”

The Joplin Globe reports that Bourne, 34, of Lamar, has been transferred to the Jasper County jail. 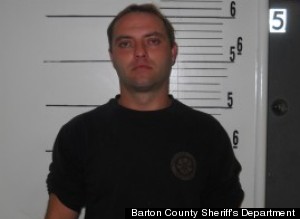 Bourne’s record shows a history of violent behavior. He was on probation after an assault conviction in Cedar County, where he reportedly assaulted his girlfriend, Brandy Bench, at an El Dorado Springs supermarket parking lot. When an officer responded to the scene and arrested him, he got into a scuffle with the officer. During the altercation, he reportedly tried to grab the officer’s Taser.

Another arrest on Bourne’s record states that he got into a domestic assault in Lockwood in an incident involving his stepdaughter.

According to Adriaunna’s sister, Lydia, Bourne drove up to the girls three times while they were playing in the park after their first day of school. She says he asked for help finding his daughters, then told Adriaunna he had a secret to tell her when they got on the highway.