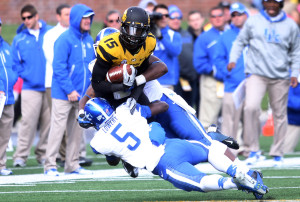 Dorial Green-Beckham is tackled by the Kentucky Wildcats defense at Faurot Field in Columbia, Missouri on October 27, 2012. UPI/Bill Greenblatt

DGB, from Springfield, Mo. is looking to establish himself as a true game changer.  He’s listed number two on the depth chart behind Marcus Lucas at the X-receiver spot.

Britt, from Lebanon, Mo. is the most experienced lineman returning to a group that hopes to stay healthier this season. He’s made 22 career starts and will start at left tackle.

Gaines, from Independence, Mo. is a third year starter and was First Team All Big 12, two seasons ago.  He should be ready to go for the season opener as he recovers from a tendon strain.

Baggett, from Lee’s Summit, Mo. was 14 of 20 on FG attempts last year, with four of those misses from beyond 40 yards.  He is also in line to also handle the kickoff duties again.

Murphy, the only non-Missouri native to make the Tigers’ list, ranked 2nd in the SEC and 10th in the nation in punt return average, after coming back from an injury that forced him to miss all of 2011.  In addition, Murphy will be included in a running back rotation with Henry Josey and Russell Hansbrough.

The defending national and Southeastern Conference Champions Alabama Crimson Tide led the league with 16 athletes named.  Alabama placed a league-high five on the first team, while earning seven on the second team, and four on the third team. LSU and Georgia both had eight receive recognition, while Florida and Tennessee had seven each.

The 2013 SEC Coaches’ Pre-Season All-SEC Football Team is listed below: