As the curtain closed on the 2013 Missouri State Fair and exhibitors picked up their entries, one particular exhibitor sparked a special interest among the State Fair staff. 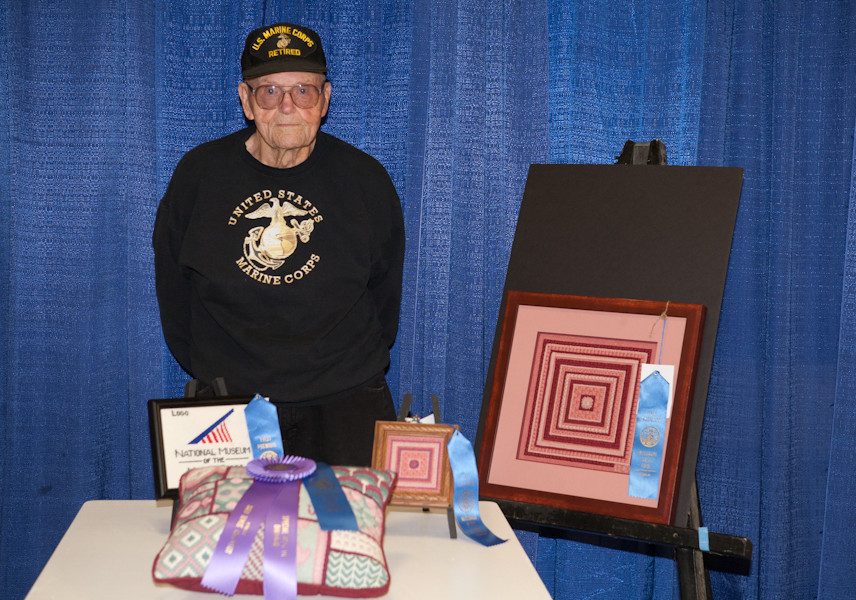 A press release sent out by fair officials says Edward Castle, age 95 of Carrollton, drove himself to the fairgrounds one last time this year, on Aug. 18, to claim his award-winning needlepoint projects, which had been on display throughout the State Fair in the Home Economics Building.

Castle, a retired U.S. Marine of more than 24 years, entered four items in the categories of Needlepoint and Crewel Embroidery and Men’s Handwork, taking home blue ribbons for each piece, and the ultimate honor, the purple ribbon for Best of Division.

“I have been exhibiting my needlepoint and cross-stitch work at the Missouri State Fair since 1977,” Castle said. “It took me a full year to complete my four entries for this year’s State Fair, plus 65 Christmas ornaments, which I didn’t enter. It takes me 35 to 60 minutes to needlepoint one square inch.”

Castle’s entries included a pillow and three framed pieces, one of which was the U.S. Marine logo illustrated in cross-stitch.

Looking at the intricate details of his work, one would never know that Castle has a health issue that causes his hands to shake uncontrollably, until he picks up his sewing needles. Castle will needlepoint for several hours each day at his kitchen table, and plans to begin working very soon on his State Fair entries for next year.

Castle is a graduate of Northwest Missouri State University.  He served as a weather forecaster while a Marine, later teaching high school math and science.  He owned a business before WWII, located in Pensacola, FL, where he married his late wife Barbara Oliver.  In 1976, he and his wife moved to a farm in Carroll County, Mo., and he currently resides in Carrollton.