You are here: Home / Sports / Cardinals come back to win in 14 innings 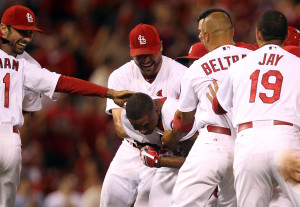 Adron Chambers is mobbed by teammates after getting the game winning hit in the 14th inning against the Pittsburgh Pirates. UPI/Bill Greenblatt

RBI of the season, as the Cardinals rallied from a 3-0 deficit to beat the Pittsburgh Pirates and cut into their NL Central lead to two games,  with a 4-3 victory on Tuesday night.

Jon Jay singled off Jared Hughes with one out in the 14th with his fourth hit. Jay stole second and scored the game winner, barely escaping the tag.

Pittsburgh had four hits against Adam Wainwright and led 3-0 after two innings on homers by Andrew McCutchen and Jordy Mercer. They had six hits the rest of the way.

The Cardinals mounted their rally by scoring two in the sixth inning and then in the ninth, forced extra innings when left fielder Starling Marte dropped Daniel Descalso’s routine fly ball for a two-base error with one out in the ninth. Descalso scored the tying run on Allen Craig’s single.