A rodeo clown wearing an Obama mask at the State Fair has spurred political action on the part of Missouri Democrats. A State Fair rodeo announcer told the crowd “tonight’s the night we’re going to smoke Obama,” and then asked the crowd if they wanted to see President Obama get run down by a bull.

Now Democratic leadership — and some Republicans — are decrying the antics as racist, shameful, and crossing the line.

Minority leader for the House of Representatives Jake Hummel of St. Louis says Missouri taxpayers contribute 400 thousand dollars to the fair, and says the incident is an embarrassment for the entire state.

“Is this what we want to be known for?,” he asks in an interview with Missourinet. He adds that the stunt had racist overtones, but says no matter what race the President is, or what party, it’s inappropriate to insinuate harm would come upon them.

“Poking fun at our president is a time-honored tradition in this country, but the incident Saturday night at the Missouri State Fair rodeo went well beyond the line,” Hummel says. “The concept of an angry bull attempting to trample a black man for the amusement of a crowd is neither entertaining nor funny and is not the type of behavior that our taxpayer-subsidized State Fair should promote.”

And he says regardless of whether the stunt was racist (witnesses say another clown ran up and fiddled with the lips on the Obama mask), the entire act was shameful.

Hummel and other House Democrats are calling on House Speaker Tim Jones to call an interim committee to investigate the situation and hold someone accountable. Hummel says the fair received $400,000 in taxpayer funds for this year’s events, and asks whether that funding should be withheld if such political stunts are allowed there. He says the Department of Agriculture is the lead agency that oversees the fair, and believes that’s where the questioning should begin.

Reporter Eli Yokley says he has confirmed the rodeo announcer sas Boonville School Superintendent Mark Ficken, who is also president of the Missouri Cowboy Rodeo Association. (Mark Ficken, the announcer, says it was the clown, not him, making the remarks. See an update to this story HERE.)

U.S. Sen. Claire McCaskill, a Democrat, says in a press release, “If what’s being reported is true, then it’s shameful and it’s unacceptable. The State Fair is funded by taxpayer dollars, and is supposed to be a place where we can all bring our families and celebrate the state that we love.”

“But the young Missourians who witnessed this stunt learned exactly the wrong lesson about political discourse—that somehow it’s ever acceptable to, in a public event, disrespect, taunt, and joke about harming the President of our great nation,” McCaskill says. “Missouri is better than this, and I expect someone to be held accountable.”

Gov. Jay Nixon, also a Democrat, agrees. In a statement sent to Missourinet affiliate KTTS in Springfield, Nixon says, “the performance was disrespectful and offensive, and does not reflect the values of Missourians or the State Fair.”

Some Republicans are also calling the stunt inappropriate.

Missouri Lieutenant Governor Peter Kinder’s Twitter feed Sunday says, “The @MoStateFair celebrates Missouri and our people. I condemn the actions disrespectful to POTUS the other night. We are better than this.”

“What the heck happened at the MO State Fair? Hearing some hubbub, but don’t know what the story is? Fill me in!”, Rowden tweeted Sunday afternoon. Soon after, he posted “I don’t agree w/ this Prez on many things. But he is deserving of respect and shouldn’t be the object of political stunts. Out of line!”

Meanwhile, internet memes are circulating the internet using a photo originally published by Progress Missouri, a liberal watchdog group based in Jefferson City. 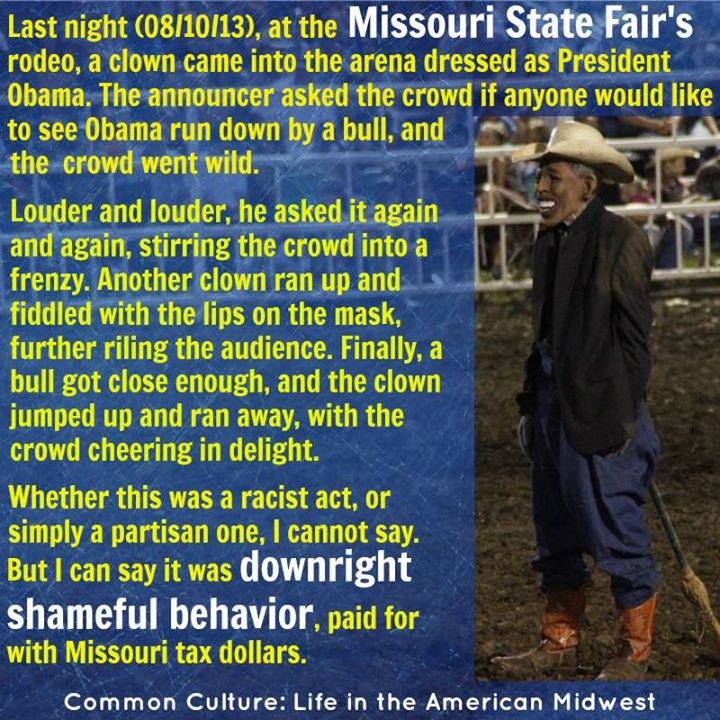 Jackson County Democrats have issued a statement that says, “This is not who we are in Missouri.  Folks in this state are decent and caring, they are fair. We would expect that at a state funded event designed to showcase the Show Me State, more care would be exercised when firing up a crowd.  Disrespecting the President is one thing; whipping a crowd into a frenzy is another. Encouraging physical harm to the President, whatever the party, is not acceptable and should not be tolerated.”

A video of the stunt has surfaced on YouTube.