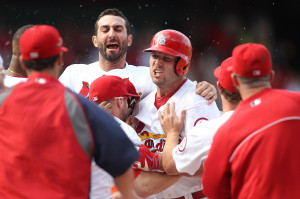 St. Louis Cardinals starting pitcher Joe Kelly stands in the dugout after coming out of the game against the Los Angeles Dodgers in the sixth inning. UPI/Bill Greenblatt

Cardinals pitcher Joe Kelly improved to 3-0 since being inserted into the starter rotation one month ago, tossing 5.1 innings and holding the opposition to one run, as the Redbirds stopped the Los Angeles Dodgers road winning streak at 15, with a 5-1 victory.

Kelly’s only blemish on the night was when Adrian Gonzalez hit a one-out RBI single in the sixth. Kelly left with runners on first and second and the Cardinals nursing a 2-1 lead. Randy Choate gave up a single to Andre Ethier, loading the bases with one out, but Seth Maness induced an inning-ending double play.

The score was 2-1, heading into the eighth inning when Carlos Beltran and Matt Adams each homered to put the game out of the reach.