President Obama largely focused on the economy, the wage gap, and the need for more jobs through manufacturing and technical skills in his speech in Warrensburg Thursday.

Obama says the winner take all economy was made worse by the recession, and reversing that trend has to be Washington’s number one priority. He says technology made some jobs obsolete, and manufacturing jobs were shipped overseas.

“Then Washington doled out bigger tax cuts to folks at the top income brackets, smaller minimum wage increases for people who were struggling, Obama told the crowd of more than 2,500 at the Student Recreation Center at the University of Central Missouri Campus. “So a lot of middle class families began to feel that the odds were stacked against them. And they were right.”

But he says America has fought its way back. Obama says during the past three years, businesses have created more than 7.2 million new jobs, and this year has seen the private sector job growth since 1999. He also mentioned an increase in exports, something Governor Jay Nixon has been pushing over his term in office.

“We produce more natural gas than any country on Earth,” Obama said. “We’re about to produce more of our own oil than we buy from overseas, and that’s the first time that’s happened in nearly 20 years. The cost of health care is growing at its slowest rate in 50 years, so we’re slowing the growth of health care costs. And our deficits are falling at the fastest rate in 60 years. Deficits have been cut by almost half from the time I took office.”

However, Obama said that in situations where he can act on his own to reverse that trend without the aid of Congress, he will. He says we need to turn the county around, and Congress takes too long to get anything done that puts people back to work and put the country back on its feet.

Obama also praised a program at the University of Central Missouri that fast-tracks students on college degree programs. The college has partnered with Kansas City area schools to offer associate’s degree classes for free while they attend high school, so that they can earn a bachelor’s degree at UCM in just two years, reducing their college debt significantly. 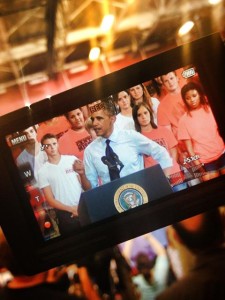 “…If we don’t invest in American education, then we’re going to put our kids, our workers, our countries, our businesses at a competitive disadvantage,” he said. “Because if you think it’s — if you think education is expensive, you should see how much ignorance is going to cost in the 21st century.  It’s going to be expensive.”

At the same time Obama was speaking about education in Missouri, the U.S. Senate passed a bipartisan measure on student loans.

Obama later issued a statement that said he approved.

“A better bargain for the middle class means making a college education available to every single American willing to work for it,” he said. “That’s why I applaud the wide bipartisan majority of Senators who passed a bill to cut rates on nearly all new federal student loans, rolling back a July 1st rate hike and saving undergraduates an average of more than $1,500 on loans they take out this year. This compromise is a major victory for our nation’s students. It meets the key principles I laid out from the start: it locks in low rates next year, and it doesn’t overcharge students to pay down the deficit. I urge the House to pass this bill so that I can sign it into law right away, and I hope both parties build on this progress by taking even more steps to bring down soaring costs and keep a good education – a cornerstone of what it means to be middle class – within reach for working families.”

Not everyone was pleased with what Obama had to say in Warrensburg. One of them was Congresswoman Vicky Hartzler, who represents West-Central Missouri.

“I am pleased that President Obama visited Missouri’s Fourth Congressional District,” she said in a press release. “But I’m disappointed he chose to make a political speech on the economy while the hard-working citizens of our district face great difficulty making ends meet in these tough economic times. I hope the President was reminded by those he met about the severe toll some of his policies are taking and will take on families in Missouri. His war on coal in our coal-dependent state could be particularly harmful to families … and his anti-agriculture EPA is a serious threat to our farm families. The hurt will only be intensified once ObamaCare’s new taxes kick in and bring pain to families. I hope he’ll take the concerns of our citizens back to Washington and work with the House to create jobs and increase take-home pay.”

Leading Missouri Democrats, including U.S. Sen. Claire McCaskill and Gov. Jay Nixon accompanied Obama to the speech. Kansas City Mayor Sly James was also among those in the VIP section.

To read the transcript of his speech, go HERE. 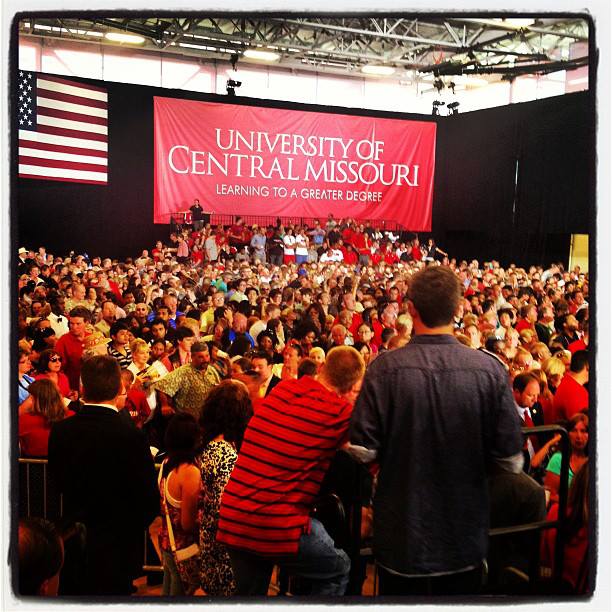