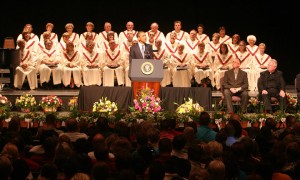 During his last public speech in Missouri, President Obama speaks at Missouri Southern State University during a memorial service for tornado victims in Joplin. 2011 Photo by UPI / Tom Uhlenbrock

Obama is expected to fly into Whiteman Air Force Base tomorrow afternoon and is scheduled to speak just after 4 p.m. He’ll be coming from Knox University in Illinois, where he is also expected to discuss the economy, recovery from the recession, and the current debate in Washington on student loans.

Obama was last in Missouri two years ago. His last public appearance was to speak at a memorial held for the victims of the Joplin tornado, just one week after an EF-5 devastated that community.

Jeff Murphy with the University’s public relations office says the school looks forward to hosting a wonderful event, and wouldn’t comment on any political crossfire. Not so the Sierra Club, which plans to be there with signs protesting the Keystone pipeline.

Murphy says the university has been overwhelmed by the public response, noting that tickets became available at 10 a.m. Monday and a line was already stretched nearly two blocks around to get them. They were gone within an hour.

He says doors open at 1:45 p.m. Wednesday, and encourages anyone who has a ticket to be there at that time.

“There is a screening process, they may have to stand for an hour or longer waiting,” he says.

He says it’s a special day for everyone.

“We look forward to having a wonderful event,” he says. “We appreciate all the support we’ve received locally and those from the campus community to prepare for the event in a short period of time.”

Famous names on campus over the years