Officer Andy Lenart first saw Jefferson City, Missouri when he and some Navy colleagues made a namesake city visit  in 1995.  He was a crewman aboard the USS Jefferson City, then a new attack submarine based in San Diego.  He’s one of those people who know what it’s like to live underwater for weeks at a time. His longest tour:  55 days.  It was to be a 15-20 day tour but “things happen,” he says.

He liked Jefferson City, Missouri  so much after his visit that he moved there when his Navy career ended in 2001. 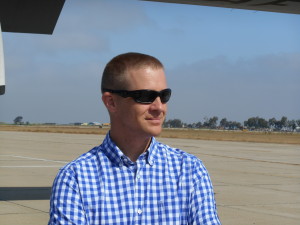 Last week he and some other Jefferson Citians spent time aboard the sub bearing the city’s name.  Lenart found a lot of life aboard the sub the same as in his day although technology has changed some operations and the crew’s personal time.  He says the advent of electronic books, movie and music devices have made life and morale better.

The Navy banned the use of cell phones, recorders, and cameras by the visitors—who were allowed to spend a few minutes on top of the sail as the Jefferson City left the harbor and later as it returned.  Fortunately, Andy had taken a couple of photographs during his Navy career from that vantage point, first as the Jefferson City’s rounded bow pushed through the water, escorted by dolphins. 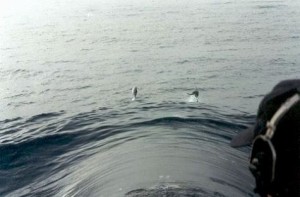 And looking aft at the wake behind the 361-foot Los Angeles Class submarine. 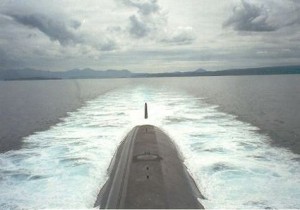 During his visit,  the sub went down to 655 feet—not as far down as it had gone during his service.  The sub’s maximum depth is classified.  Officials will only say it is “greater than 700 feet.”