You are here: Home / Sports / Carpenter’s homer pushes the Cardinals past Astros 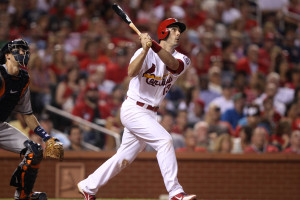 Throw out all of that nonsense about lefty pitchers vs. lefty hitters when it comes to Matt Carpenter. Nine of his 14 homers have come against lefties and his two run shot Wednesday night helped the Cardinals to a 5-4 win over the Houston Astros.  Carpenter’s homer in the seventh gave the win to Seth Maness (5-1).

After Brett Wallace gave Houston a 4-3 lead with an RBI single in the top of the seventh, Tony Cruz got hit by Houston starter Jordan Lyles and one out later Carpenter took a 2-1 pitch from reliever Wesley Wright into the right-field seats.

Maness gave up two hits and a run in two innings of relief. He struck out three. Edward Mujica earned his 25th save in 26 tries. He has appeared in six consecutive games, going 1-1 with four saves.