An Iberia man has been charged with murder in connection to the missing Miller County teenage girl found dead over the weekend. Online court records state Steve Henderson of Iberia faces felony charges of first degree murder and armed criminal action in the death of 13-year-old Macala Shelton, whose body was found Sunday morning in a wooded area on an abandoned farm near Iberia. 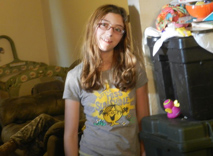 Henderson reportedly admits to stabbing her to death with a large survival knife.

The Missouri State Highway Patrol issued an endangered person advisory for Shelton Saturday afternoon, which said the girl was last seen going to bed at her home Friday night but. She turned up missing Saturday when her grandmother went to wake her up. Sheriff Bill Abbott says an autopsy has been scheduled and the investigation is ongoing.

The Miller County Sheriff’s Office is holding a press conference this at 3 p.m.