Missouri has about 51 thousand men and women in the military. Sgt. Matthew Gardea of Kansas City is one of them. He says the military is a good option for young people who might not know what they want to do in life. 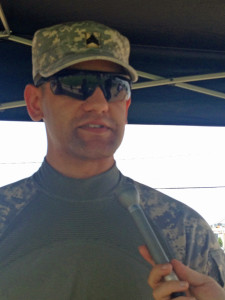 “If you’re considering the armed services, the best way to do it is go talk to a recruiter,” he says. “We’re here to give you a lot of information, a lot of people might think that we’re here to kidnap you in the middle of the night and ship you off to war, it’s not like that at all. We just want people to understand there’s a lot of choices out there. we have a lot benefits out there that can help you not only better yourself as a person, but better your station in life.”

Gardea, who has been active duty for eight years, says until he went and talked to a recruiter, he didn’t know about what the Army has to offer.

“I was unaware about all the benefits we receive,” he says. “Not just medical and dental, but being able to fly for free from to base to base — I’ve done that before. There’s also a lot of benefits in terms of credit applications, low interest loans for homes, businesses, for cars.”

And he says for him, its provided an opportunity to see the world.

“For the Army specifically, I’ve deployed three times to Iraq,” he says. “During my time, I’ve gone to several bases here in the U.S. I’ve also gone to Mexico, Germany, Ireland, I’ve been to Canada. The Army’s offered me a lot of opportunities to go places I never would have gone on my own.”

The latest numbers from the Department of Defense shows there are about 1.4 million members of the military throughout the U.S. A little more than half a million of them are in the Army. About 17 thousand Missourians are active duty in the Army. A total of 51,510 Missourians are enlisted in the four branches of the armed services, active and reserve, and the National Guard.

For those who might not see active duty in their future, the Army says the reserve might be more fitting, especially those who want to go to college with their peers.

“In the Army Reserve, you may qualify for up to a $15,000 enlistment bonus, get money for college and repayment of your student loan,” the Army says.

The Pentagon reports it’s tougher to enlist than ever before, due to higher standards put in place by the military. A high-school diploma, good scores on entrance exams and a clean record are preferred, and because of the economic slump in recent years, there’s a lot more competition to get into the Army, Navy, Air Force, and Marines. Pulling back our military forces in the Middle East has also meant Uncle Sam can afford to be more selective than before.

Reports show that nearly 50 percent of today’s youth are considered unfit for military service because either they failed to graduate high school, have previous drug or alcohol charges or other criminal offenses on their records. More than 35 percent of the candidates are disqualified because of medical conditions including obesity.

Government records indicate that in fiscal 2012, the military enlisted about 155,000 new recruits, the lowest on record since World War II.