The University of Missouri Extension Office says Japanese beetle grub worms are appearing throughout Missouri and will emerge by July 1. 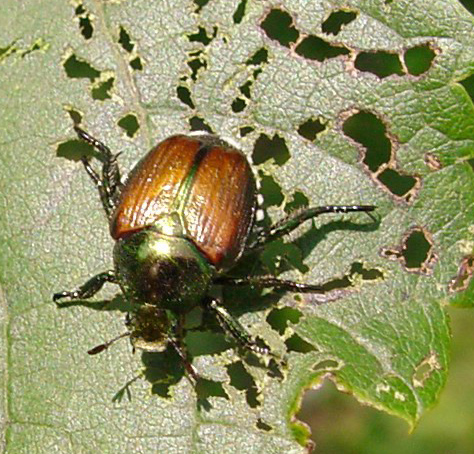 Entomologist Wayne Bailey says white grubs of the Japanese beetle lie just below the soil surface in many parts of Missouri, and they’ll begin to emerge as adult beetles soon.

“The beetles are still in the colonization stage in rural Missouri counties and are expected to increase for the next seven to 10 years before beneficial pathogens and insects will slow population growth,” he says. “The Japanese beetle was first found in the U.S. in 1916, possibly arriving in shipments of irises from Japan. It made its way to Missouri by 1934 and stayed primarily in urban areas through the 1960s, living primarily in golf courses and plant nurseries where grubs of the pest were brought in with soil.”

Adult Japanese beetles are about a half-inch long and metallic green in color with bronze- or copper-colored wing covers. Groups of beetles feed on corn’s green silks and tassels, foliage of soybeans, and the fruit and foliage of more than 400 flowers, shrubs and trees, MU Extension reports.

This can be be news for farmers, since the beetles feed on green corn silks and tassels, disrupting pollination and reducing yield because the ears are left with fewer kernels. Feeding on soybean foliage results in a lacelike pattern of holes on upper plant leaflets, often resulting in plant growth and possibly reducing yields.

Linden trees and roses also are especially susceptible to damage by Japanese beetles, but more than 400 plants can be affected.