(IN THE CAB OF UP LOCOMOTIVE 4928 EAST OF JEFFERSON CITY)–The people who drive the railroad engines that crisscross Missouri hope they see only clear tracks ahead of them  But this is the time of year when the chances increase that they’ll see something else.

Engineer John Yerby of Bland in the right seat, conductor Bob Burke of Sunrise Beach in the left.

Driving a train is a more than pushing the throttle forward and riding away.  The road directions are a complicated mix of speeds, times, and balancing power and braking with the weight of the load, the grade of the track and other factors. There’s even an irritating bell that goes off every couple of minutes that keeps the engineer awake–he has to hit a button to shut it off.

Both men have seen vehicles in front of them that shouldn’t be there but they’ve never hit one.  But one day, Burke’s train came around a curve and there was a man walking toward it. “You try to do what you can,” he says, but it’s impossible to stop.  Yerby says a heavily loaded train can take a mile to a mile and a half to stop, which is why railroads run safety campaigns about this time each year, warning motorists to obey gates and lights…and look carefully at crossigns without them.  As UP safety officials John Simpson puts it: “You’re 20 times more likely to die in a car-train collision than in any other kind of motor vehicle collision.” 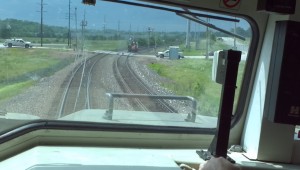