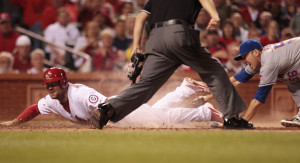 Ty Wigginton slides across home plate with the go ahead run as pitcher Scott Rice tries to apply the tag in the seventh inning. UPI/Bill Greenblatt

The Cardinals scored three runs in the seventh inning to break a 3-3 tie and open this four game set with the New York Mets with a 6-3 victory Monday night at Busch Stadium. Matt Holliday provided the insurance with a two-run homer, but it was a couple of fortunate plays earlier in the inning that started the rally.

Former Cardinal Rick Ankiel, who was just signed by the Mets earlier in the day, missed a diving catch on Ty Wigginton’s hit to shallow center to start the seventh. Ankiel didn’t have any of his equipment as it didn’t arrive in time, so he used pitcher Jonathon Niese’s glove.

“I do think if I have my glove it stays in there,” Ankiel said. “I’m the type of person, if I get a glove on it I feel I should have caught it. I didn’t. It stinks.”

Matt Carpenter then ripped a shot off pitcher Scott Rice’s leg and the ball rolled into foul territory down the first-base line. Wigginton scored  to beat the tag to give the Cardinals the lead. Matt Holliday homered off Scott Atchison, scoring Carpenter, for the three-run advantage.

Lance Lynn picked up his sixth win, but things were shaky early. Lynn threw a career-high 124 pitches, and 54 pitches in the first two innings, where he allowed three runs.